Why ‘grieving’ Federer will always be the GOAT

It’s been 24 years of tennis that more often than not was sublime.

Roger Federer became the most celebrated tennis player in history, but sadly for the 41-year-old the last couple of years have not been kind to him on the injury and surgery front.

Sport was expecting the day would come when he had to make his retirement announcement, but when he made the initial announcement about a week ago, it was still a shock.

This weekend’s Laver Cup, in which he will play one doubles match, would be his last official event. At the time of writing, it had not been confirmed who his partner would be for that doubles, but it is likely to be his oldest rival Rafa Nadal, the man he has been through the most with and with whom he has a very special relationship.

For the last year Federer has not played. It has given him the time and opportunity to get an idea what it would be like to retire.

He said there was a process he went through to test himself physically, but he could feel it was getting more difficult and even though the three surgeries on his knee have allowed to keep him going generally, the stress of training for tournaments and playing actual matches is something entirely different.

“I got a scan back which wasn’t what I wanted it to be (and) at some point you sit down and go, OK, we are at an intersection here, at a crossroad, and you have to take a turn. Which way is it?” Federer said.

“I was not willing to go into the direction of let’s risk it all. I’m not ready for that. I always said that was never my goal. I can’t believe, if I look back at the last few years that I went through, the surgeries that I had to go through, for me it was always clear that I was going to end my career with no surgeries.

“Any suggestions there from my side would be don’t have surgery if you don’t have to and just take the necessary time to come back, because it is brutal. I think tennis is a tough sport to bounce back into, because you have to be able to play long matches, five matches in a row every week, different continents, different surfaces. There is no substitute for you. Obviously mentally you need to know you have to be able to get all the way back there, and it’s hard.

“Then maybe the hardest part after that one point, of course you’re sad in the very moment when you realise, OK, this is the end. I almost sort of ignored it for a little bit. I went on vacation and just said, ‘OK, this is it’. This moment came shortly after I was at Wimbledon where I still truly actually believed there was going to be a chance for me to come back the next year. At what capacity, I didn’t know, but I thought it might be possible.”

While on vacation he didn’t speak of the “R” word but once that was over the reality began to hit.

The moments were bittersweet. He was worried. He was “scared to face the music.”

There was “grieving” but still he did not want his announcement to be a “funeral,” instead a celebration and party mode. “The bitterness, you always want to play forever. I love being out on court, I love playing against the guys, I love traveling,” Federer said.

“I never really felt like it was that hard for me to do, of winning, learn from losing, it was all perfect. I love my career from every angle.

“That’s the bitter part. The sweet part was that I know everybody has to do it at one point. Everybody has to leave the game. It’s been a great, great journey. For that, I’m really grateful.”

Roger doesn’t hold the records for No.1 or the most majors anymore but for a vast number of people he will always be the GOAT.

He set the bar and standard that all others have followed and chased. 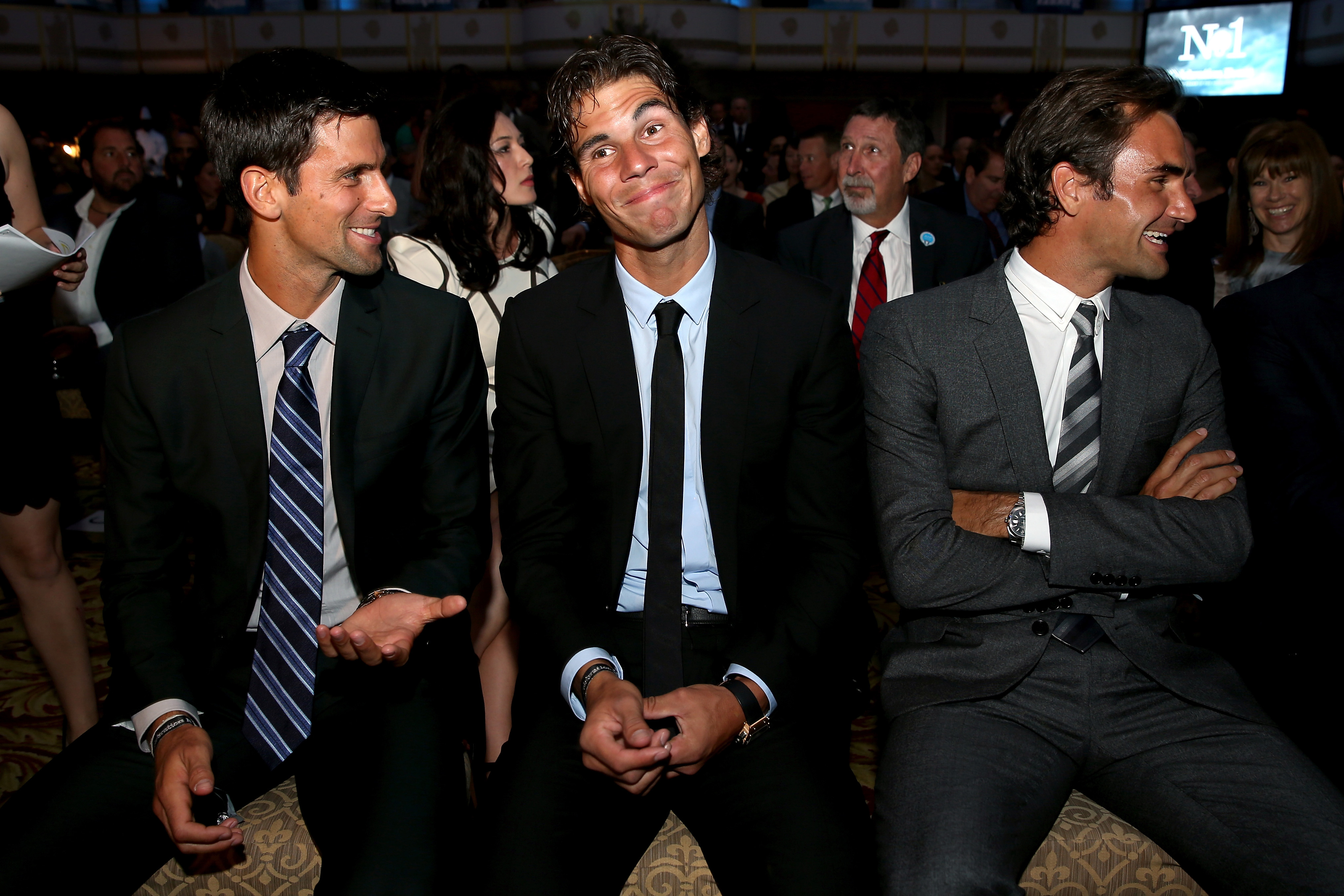 His grace on the court, his presence off the court, his fluidity and longevity in the game are the contributing factors for all those who regard him as the greatest of all time.

“I’m definitely very proud and very happy where I sit,” he said.

“One of my big moments of course was winning my 15th slam at Wimbledon, you know, when Pete (Sampras) was sitting there. Anything after that was a bonus. That was the record, you know, and then of course it was other records along the way.

“But then of course nowadays, I think, and it will only increase, players will want to chase records. It’s true at some point I kind of probably did as well, but not the first years until I got closer to Pete’s record. I’m happy on and off the court. I think I had the best of times.

“Obviously the last few years have been what they have been, but I’m very happy that I was able to win another five slams from 15 on. For me it was incredible. Then I made it to over 100 titles, and all that stuff has been fantastic. Then just my longevity is something I’m very proud of. Don’t need all the records to be happy – I tell you that.” 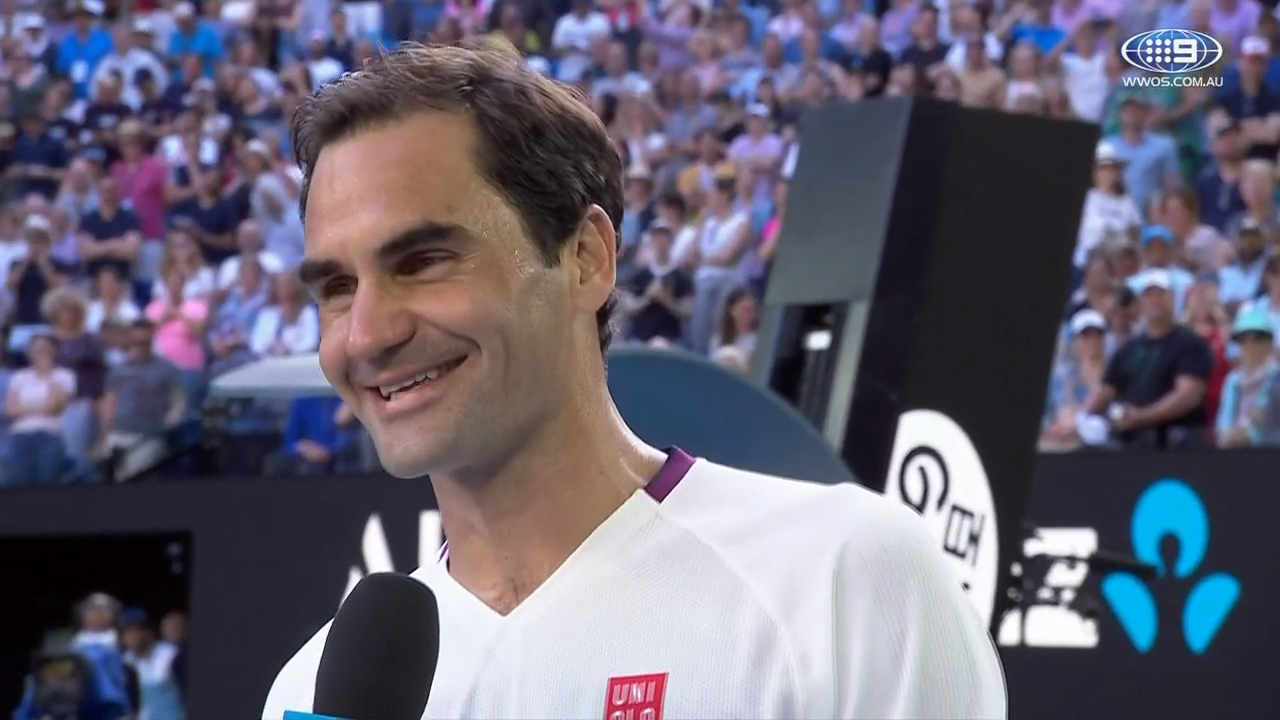 John McEnroe was unstinting in his praise for Federer and referred to him as a “class act” and, like everyone who had the pleasure of watching him “dance” on a tennis court, found it a privilege.

“(He is) the most beautiful player I have ever seen on a tennis court. I idolised Rod Laver so that tells you something,” McEnroe said.

“Thank you for everything you have done. That’s all I can say. Your absolute love of the game, it rubs off on all of us. I got goosebumps just by feeling that because it’s been a pleasure watching you these last 20 years.”

Asked if he could pinpoint a highlight of his benchmark career, Federer found it difficult to do.

How fortunate to be in such a position that there were so many highlights. 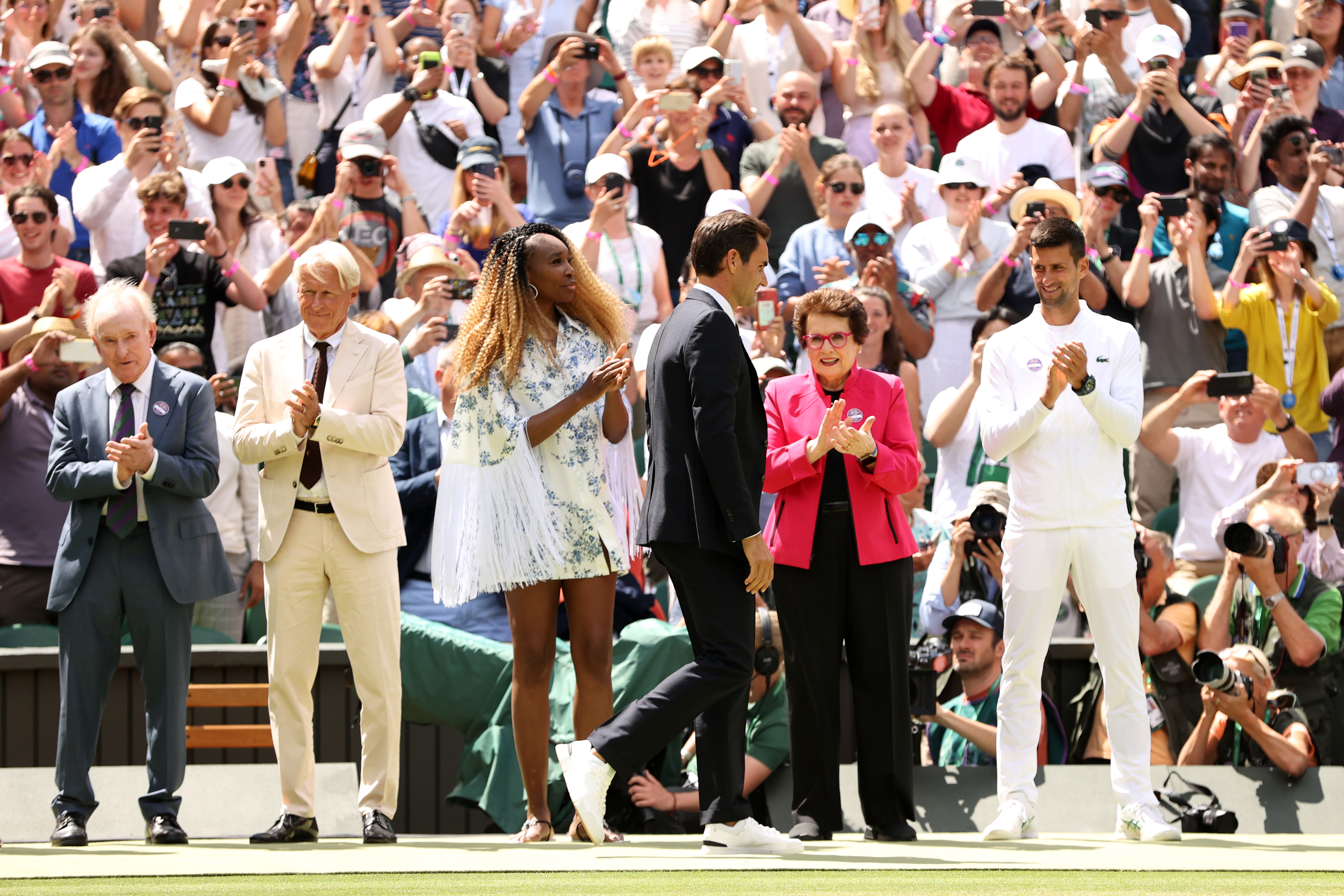 “Obviously you think of your first Wimbledon, the 2017 comeback, winning Australia, ’09 French Open. I know there is a lot of different little nuggets as you go along with and could be something… who knows what it is.

“I’m fortunate that I can almost pick and choose which moments were the best because there were so many. Very fortunate.”

He says he hopes he is remembered for his longevity.

“I think looking back that has a special meaning to me because I always looked to the Michael Schumachers, Tiger Woods, all the other guys that stayed for so long at the top that I didn’t understand how they did it. Next thing you know, you’re part of that group, and it’s been a great feeling.”

Now he looks forward to the next chapter and first up is to catch up with people and then go on vacation. 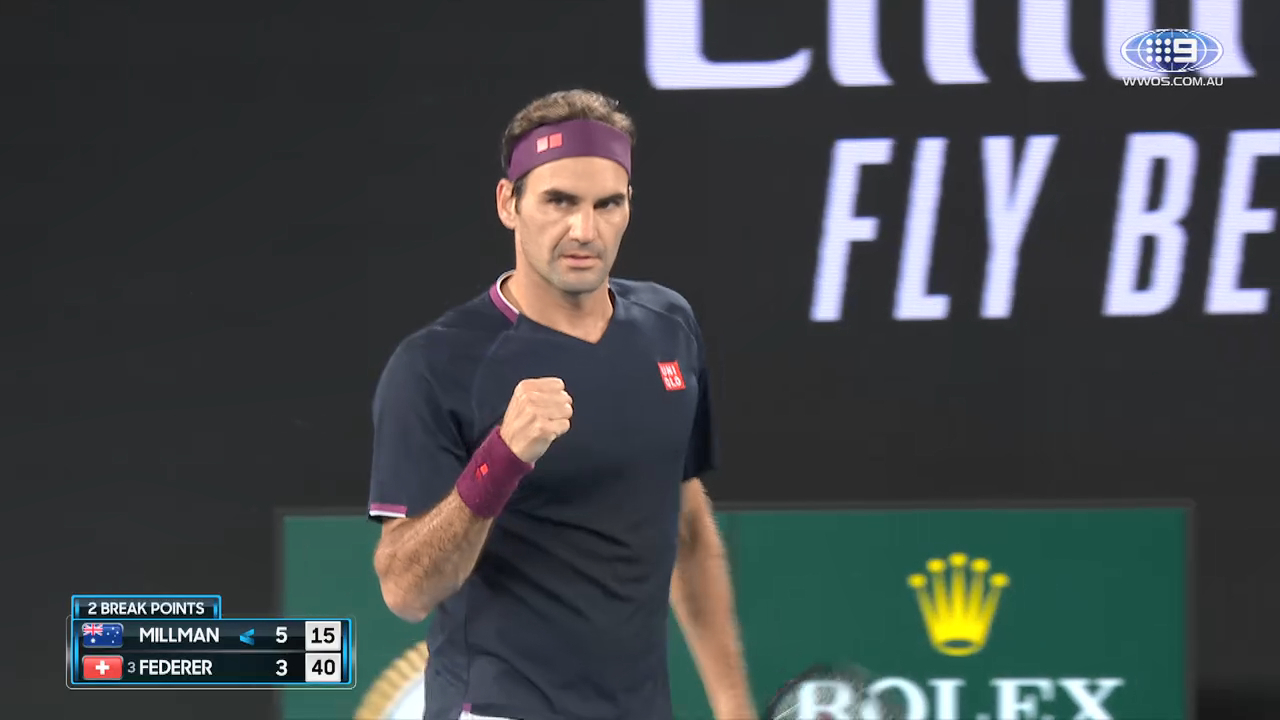 It’s a perfect moment to spend time with his wife and once Laver Cup is done, review how it has gone.

But one point he did stress is that he is not being lost to tennis.

“I just wanted to let the fans know I won’t be a ghost,” Federer said.

“I (was talking) about Bjorn Borg. I don’t think he returned to Wimbledon for 25 years. That, in a way, hurts every tennis fan. Totally acceptable, his life, his reasons, but I don’t think I’ll be that guy. I feel tennis has given me too much.

“I have been around the game for too long. Have fallen in love with too many things.” 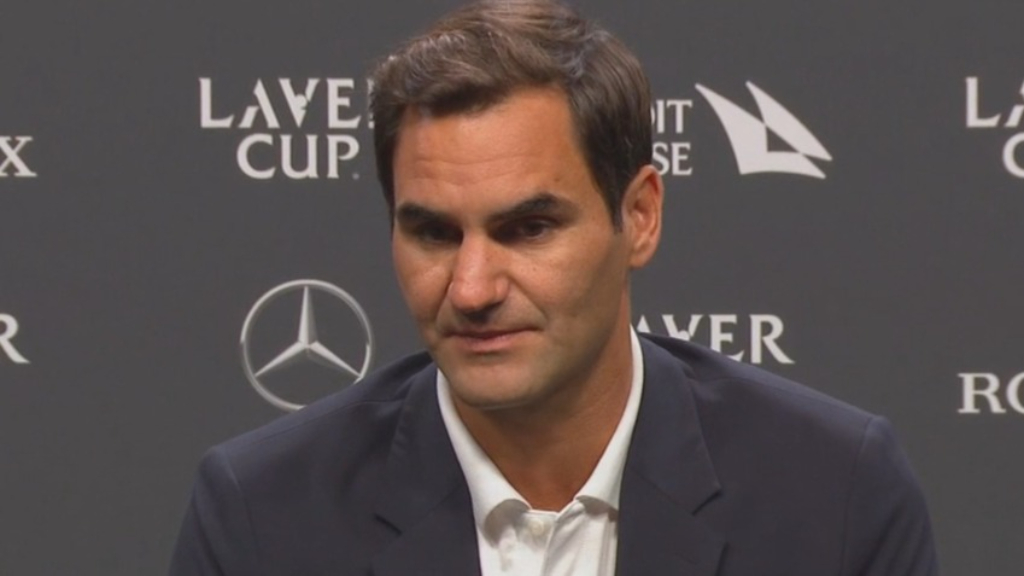 For a daily dose of the best of the breaking news and exclusive content from Wide World of Sports, subscribe to our newsletter by clicking here